"The characters are as big as real life and the story realistic and dramatic . . . IN TRANSIT is a winner!" Romance Reviews Today

"If you enjoy suspense and danger with romance and great characters, you will enjoy this book . . . It is quick paced and full of action, with an eye to realism and human emotions."  Seattle Post Intelligencer

"Gerard creates a female protagonist who is easy to root for. IN TRANSIT may revolve around cops, but it is centered around the workings of a woman's heart."  The Examiner 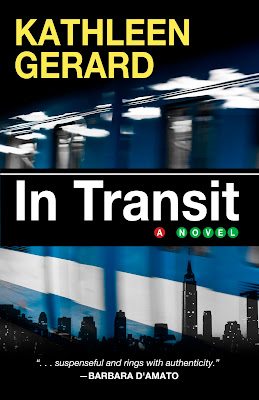 Can a rookie cop survive the men who cross her path in the NYPD?

When a psychic in a shopping mall tells Rita Del Vecchio that she is "destined for greatness," and she will "marry a man in uniform," the restless, wet-behind-the-ears, 22 year-old decides to finally take control of her life. Rita sets out on a quest to become a New York City Police Officer. But can a spry, feisty, single woman thrive in the gritty world of New York's Finest?
Leaving behind the suburbs of New Jersey and a job as an under-tipped waitress, Rita Del Vecchio hangs up her apron and ballet slippers for a bullet-proof vest. But will she wear it? And if she does, will it protect her on the mean streets of Manhattan? Can it also protect her from Cupid’s arrows if they should land amiss?
Rita is assigned to the New York City Transit Police Squad and gets more than she bargained for. Riding the Lexington Avenue Subway Line, Rita winds up meeting not one man in uniform, but many.  Whom will she love?
IN TRANSIT combines romance and suspense. This woman-in-jeopardy story delves into the ordinary lives of NYPD career cops and how their fates are determined by people who hold secrets as dark and as labyrinth-like as the New York City Subway System.

ADVANCE PRAISE FOR THE BOOK:
"Rita Del Vecchio is a great, fresh character; vulnerable yet tough . . . IN TRANSIT is suspenseful and rings with authenticity. Ordinary citizens are usually unaware of the role of the transit police and seeing Rita work against the very real backdrop of New York City is a real treat."

BARBARA D'AMATO
Agatha, Anthony
and
Mystery Writers of America award-winning author of
AUTHORIZED PERSONNEL ONLY  and
DEATH OF A THOUSAND CUTS